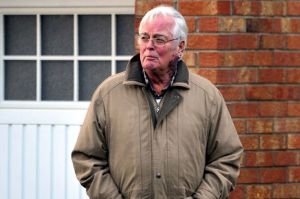 Yesterday a jury took 10 hours to find Gordon Anglesea guilty of child sexual abuse at Care homes in North Wales (including Bryn Estyn and Bryn Alwyn) during the 1970s and 1980s. Here are some original reports on the case from 1994 when it first came to court. Anglesea sued for libel against a number of press and media outlets, and won substantial damages (£375,000).

Addressing Anglesea at Mold Crown Court Judge Geraint Walters said “there can only be one sentence and that is a prison sentence”.

“The victims in this case have waited a long time for justice and I am pleased that today they have seen this done,” said ACC Richard Debicki.

“It has not been an easy journey from them, it has taken courage to stand by their convictions, but I hope that they will now take some solace from seeing their abuser brought to justice.”

“I would like to apologise on behalf of the force to those whose lives he so traumatically affected.”

Anglesea, a former superintendent in the Wrexham area, had denied the charges, with his defence funded by the Police Federation.

He was also found not guilty of an alternative charge of a serious sexual assault, and granted bail until 4 November when he will be sentenced.

Ed Beltrami, chief prosecutor for the Crown Prosecution Service Wales, said Anglesea had been in “a position of power and authority in order to prey on very young and vulnerable victims” and praised those who gave evidence for helping to secure his conviction.

“I hope that it will also prove to be a meaningful step in the recovery process of his victims, who have had to live with what happened for a long time before seeing their abuser brought before the court,” he added.

‘Smirk on his face’

Anglesea was arrested in 2013 as part of the National Crime Agency’s Operation Pallial investigation into historical abuse across north Wales.

One boy was abused in the showers of a Home Office attendance centre in Wrexham run by Anglesea, who was a police inspector at the time.

The court heard how he subjected juvenile offenders to a military-style, “short, sharp shock” regime of physical exercise, drill parades and woodwork classes on Saturday afternoons.

Anglesea was “answerable to no-one” at the centre and would “inspect” the parade, make the youngsters do naked sit-ups and squat thrusts, then loiter around the showers “with a smirk on his face“.

His second victim was initially sexually assaulted by convicted paedophile John Allen, while living at the Bryn Alyn children’s home in Wrexham and the abuse sometimes involved other adults who used him “like a toy”.

On one occasion, at a house in Mold, he said Anglesea “grabbed him by the hair” and indecently assaulted him, calling him “scum” and telling him he had the “power to send him away“.

The prosecution said both victims had been left “damaged” by the abuse and led “chaotic” lives of crime and drug and alcohol addiction.

During the trial, Anglesea was questioned about links to other paedophiles, including Gary Cooke, who is currently serving 14 years in prison, and Peter Howarth, former deputy head of the Bryn Estyn children’s home, who died in prison in 1997.

In 1994, Anglesea was awarded £375,000 in libel damages after media organisations ran stories about his links to abuse at children’s homes in north Wales.

One report, published in 1991, detailed how Bryn Estyn residents claimed he was a regular visitor to the home.

Anglesea has always maintained the allegations at the heart of the libel case were false but said in court that even after the libel trial, the issue “never went away”.

One of those publications sued by Anglesea was the satirical magazine Private Eye.

In a statement, its high-profile editor Ian Hislop, described that action as “one of the darkest periods of my editorship“.

“During the libel trial Anglesea said that he had never assaulted any teenage boys. We now know that this was a lie, that he was indeed a paedophile, that in truth he had no reputation to defend.

“I take a certain grim satisfaction in this verdict today and in the fact that justice has eventually been done.”

But Mr Hislop said he did not intend to revisit the libel case.

“Private Eye will not be looking to get our money back from the libel damages. Others have paid a far higher price,” he said.

Sadly some of Anglesea’s victims did not live to see justice served, having taken their lives (or had their lives taken from them) in the interim. For them it is too late but they should never be forgotten. For survivors, I send my very best wishes of strength – justice has finally prevailed for you.

I understand that a further 29 people will now be questioned and that the Police Federation has yet again funded Anglesea’s defence.

It’s also worth noting that he was allowed to leave via the back door of the court to avoid the press and he has been released on bail until his sentencing hearing at the beginning of November, thus proving that some people STILL get the preferential treatment not afforded to others even when guilty on the MOST heinous crimes.

From The Times newspaper: 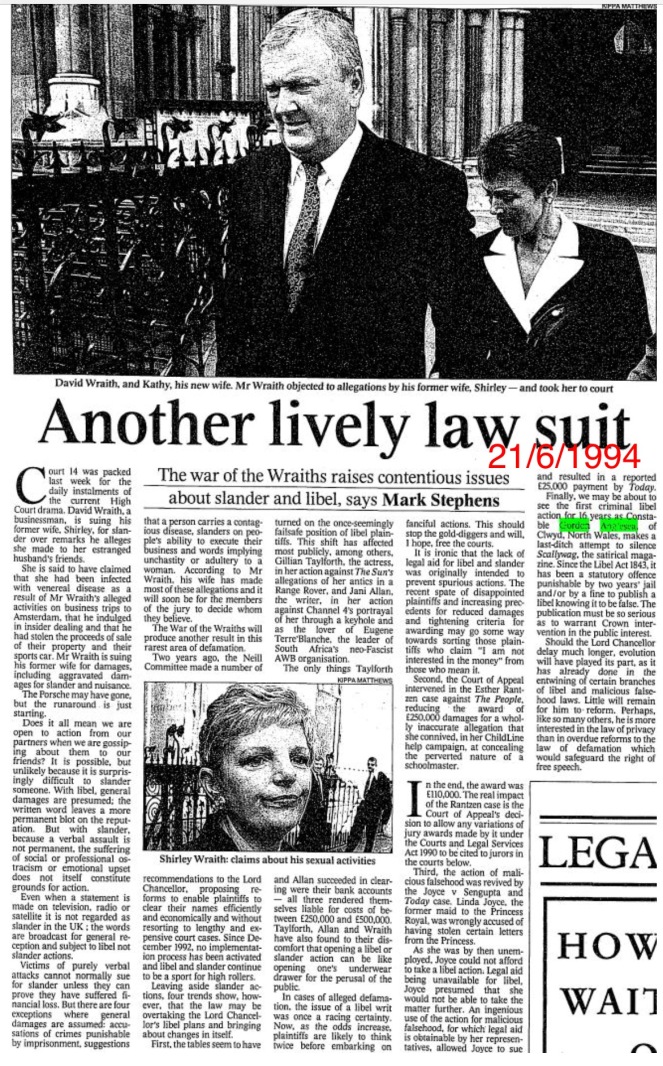 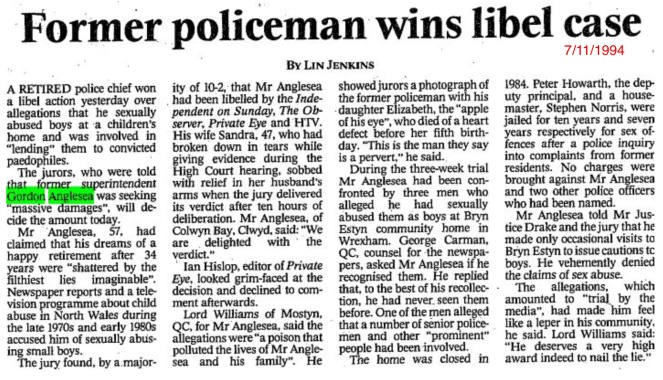 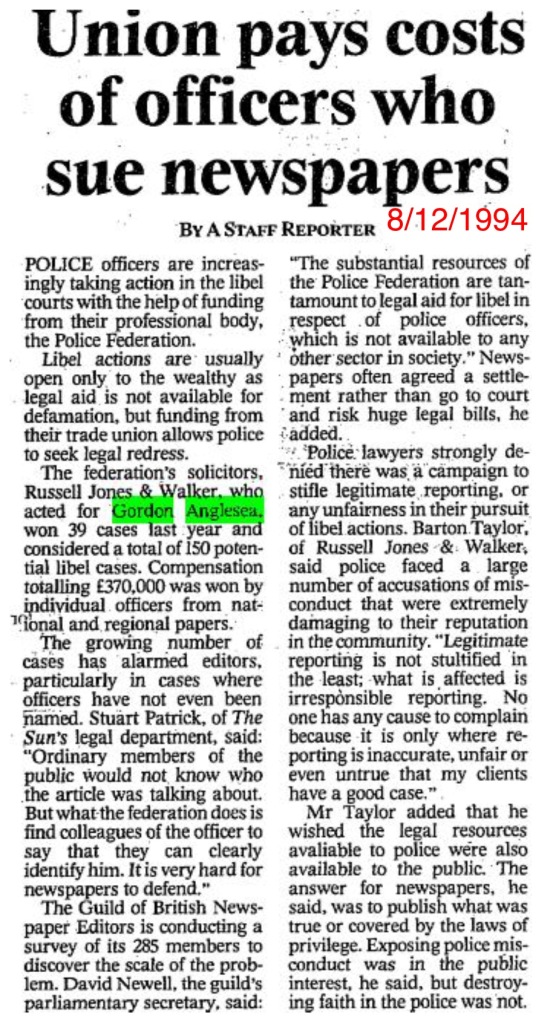 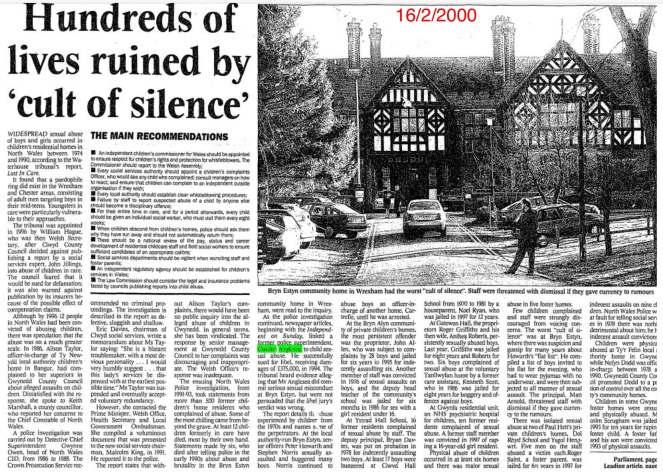 So what does this all mean in terms of the Waterhouse Report?  Did it ever have the remit to get to the truth?  William Hague was Welsh Secretary at the time – will he be questioned now over failings towards victims and survivors?  Could Lord Alastair McAlpine have been questioned on new evidence if still alive? – Just how far has the miscarriage of justice been allowed to creep?

As always, just too many questions and just too little, too late.