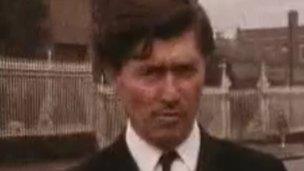 Clifford Luton was a BBC reporter for 15 years between the 1960s and 1970s.  Despite numerous court appearances charged with abusing children, the justice system never seemed to conclude a case against him and in one of the later trials, part of the case wasn’t heard in court.  I have my own theory as to why this might be, but there is no proof.

Luton wrote a letter to the New Scientist.  His address is stated as The Vineyard, Richmond, Surrey.  LINK

Luton was working as a reporter at the Daily Express. LINK

Luton appears as a character witness in the intriguing trial of Laurence Terence Bell.  Bell appeared at the Old Bailey, accused of indecency with young guardsmen at Chelsea barracks.  He was eventually found not guilty having pled that he was framed by ‘the powers that be’ as he gave information to the press regarding Stephen Ward, John Profumo and Christine Keeler – in particular allegations of Ward’s attempts to acquire nuclear information.  It is a fascinating case and one I have covered in a recent blog post.  By now Luton had begun working for the BBC and had known Bell for a year.  He stated that Bell had contacted him with information on Profumo, Keeler “and others”.  Luton also confirmed that as an informant, Bell was considered a credible and accurate informant in Fleet Street.   Luton’s address is given as Lammas Park Road, Ealing.  The Guardian, Newspapers.com

Luton writes a letter to The Times.  His address is stated as 12 Elm Grove Road, London, W5.

Owen Greenwood writes a letter to The Times.  His address is stated as 12 Elm Grove Road, London, W5.  Greenwood still lives with Luton in Poole.

Clifford Luton, 54, a BBC-TV news reporter accompanied two detectives to London after they visited his Ketch, Sarah Jane, moored at Poole, Dorset.  The detectives also went to the Poole Office of the North Sea Cruising Association, where Mr Luton is sailing master.

Luton then appeared at Tottenham Magistrate’s Court charged with abusing a girl and three boys.

REMAND ON BAIL FOR BBC REPORTER

On 19th July 1979 Luton was given a conditional discharge by the judge, who said:

“In the 10 months this case has taken to come to trial, you have been punished enough.”

Former BBC television reporter Clifford Luton sexually assaulted two boys on board his yacht, a court heard yesterday.  Magistrates at Tottenham, London, were told that the offences happened when 55-year old Luton, a keen sailor, took the children on cruises.

Luton, of Poole, Dorset – who quit his job when the offences were revealed – was given a conditional discharge.  The magistrates said: “In the 10 months this case has taken to come to trial, you have been punished enough.”

Luton was named in a Sunday Mirror expose as having being one of those men being questioned by police investigating a paedophile ring.  The three men named were Dr Roderick Morris Fraser, Luton and Nicholas Reynolds.  The article (on the Spotlight blog) states:

Former BBC reporter Luton also refuses to comment about the police investigation.  He runs the North Sea Cruise Association from his home in Ashley Road, Parkstone, near Poole, Dorset.

The Association founded by Luton 25 years ago, advertises boat trips for youngsters.

As a high-flying journalist, he reported on war zones including Beiruit, Northern Ireland and the Congo.  He also covered Francis Chichester’s historic voyage around Cape Horn.

A skilled yachtsman himself, he owns a 28 foot boat, the Sarah Jane.

This group was one of those set up pre-Azimuth Trust.

Azimuth Trust was founded by Dr Roderick Morrison Fraser, Michael Johnson and John Lambeth.  Johnson and Fraser were connected to other paedophiles such as Charles Napier (brother of John Whittingdale), Peter Righton and Terence Waters among others.  Cathy Fox has done a great indepth blog post about it all, and there is also the blog post I put together regarding the Righton investigation – Operation Clarence.

There is also a very interesting video about Azimuth and it’s members on YouTube.  Interestingly, the only person to be convicted was Johnson and in 1994 the police were criticised over their handling of the case.

Luton launched a complaint via the PCC against The Daily Telegraph and Sunday Times over their obituaries for reporter Murray Sayle. LINK

Luton appeared at Bournemouth Crown Court accused of indecent exposure and possession of indecent images.  There was also a further charge but the details were not heard in court..  The case was adjourned until September 2013 and Luton was released on bail. LINK

Luton appears at Bournemouth Crown Court accused of indecent exposure and possession of indecent images.  There was also a further charge but the details were not heard in court. LINK

A judge halts the trial of Luton indefinitely due to his health. LINK

A judge halts the trial of Luton indefinitely due to his age and health. LINK

Despite these recent trials and that in 1979, Luton is still registered as a trustee of the North Sea Cruising Association.  According to the Charity Commission, the objects of the charity are:

“TO PROVIDE FOR BOYS OF SCHOOL AGE A SOUND TRAINING IN CRUISING SEA-GOING YACHTS.”

Nothing more is known about Luton.  He simply disappears.  In typical Janner style he became too old and mentally unwell to face justice.