THE TESTIMONY OF MICKEY SUMMERS

A right royal pain in the arse…

This week, IICSA released its damning findings on the widespread abuse of children within the Nottinghamshire children’s ‘care’ system.  One man whom I have followed for a number of years is survivor Mickey Summers, who has fought tirelessly against the denials and cover ups he has encountered since he was a child.

Mickey went to extraordinary and unorthodox lengths to expose the truth, and although the Nottinghamshire fight is still ongoing, Mickey and all his fellow survivors have finally had their accounts heard.

I have decided to transcribe Mickey’s closing statement that was given at the end of the Nottinghamshire hearings because it’s quite possible one of the most heartbreaking, brutally honest and succinct accounts I’ve ever heard.

Despite what the deniers, apologists, and paedophiles claim, survivors don’t come forward for fun, for compensation or to cause trouble.  They simply want their truth to be heard. No matter what trolls do, they will never stop people like me giving survivors a platform or publishing accounts.  However, unfortunately they will never realise how their wreckless actions harm survivors who have lived with the burden of their abuse throughout their fractured lives, or dissuade youngsters trying to find the courage to disclose abuse.  Mickey explains so perfectly why it’s important to listen and understand:

…when children are no longer hidden away but are made visible, it is so much harder to abuse them and mistreat them.  Most importantly these children need to feel and believe that they belong and are cherished by our wider collective societal family.

…Records relating to child abuse have this amazing ability to be carried off by biblical floods, fires or to have never existed… just like my abuser.

Mickey’s statement – read by his counsel, Mr Enwright – can be watched here and is the first 10 minutes of the video evidence.

Mr Enright: Good afternoon.  Today my name is Mickey Summers, but it could be John or Joan or Jill or Jack, because my story is not at all unique.

I am, as the very fine MP, JOHN MANN described me, “a right royal pain in the arse.”

Turning to Nottingham City Council, County Council, Police and CPS, I do not trust you.  Apart from one or two notable exceptions, I have heard nothing in the past four weeks that has changed my mind and let me tell you why.

Now, I can summarise for you in just six words how not to regain trust and how to begin to rebuild trust – six words…

That’s it.  We saw it yesterday – night and day.

I challenge you to change your view of us, how you think of us and how you treat us.  Take up that challenge knowing that it will not be an easy road, but if you decide to, we can build a new relationship.  That is the challenge – take it.

Finally Chair, the efforts of your panel and the Nottingham survivors have begun to pull back their heavy bales of shame and fear and secrecy, that allows child abuse to happen and shields child abusers.  This inquiry has allowed light to shine in the dark places where children cower.

There were things that were previously not spoken of, like mental health and domestic violence, and it was only when people began to speak about these things in public that things began to change, shame and fear evaporated like mist, and truth emerged like the sun.  The same thing needs to happen with child abuse, so I have just two suggestions:

Let them know, Chair, that the sheriffs are coming back to town.  Thank you.

We have published our report on children in the care of the Nottinghamshire Councils.  For decades, children who were in their care suffered appalling sexual and physical abuse, inflicted by those who should have nurtured and protected them.

Those responsible for overseeing the care of children failed to question the extent of sexual abuse or what action was being taken.

Despite decades of evidence and many reviews showing what needed to change, neither of the Councils learnt from their mistakes meaning that more children suffered unnecessarily.

We hope this report and recommendations can help ensure it never happens again. 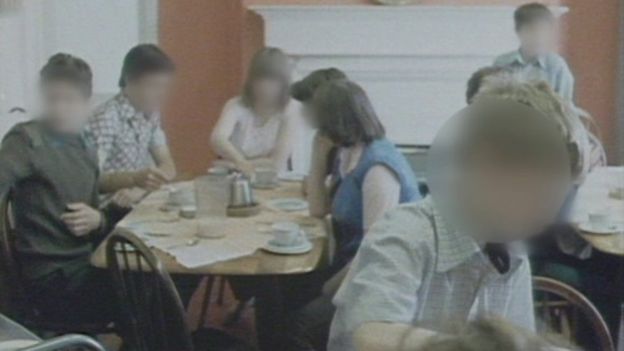 Hundreds of children were sexually abused by predatory foster carers and residential home staff who were allowed to thrive, an inquiry has found.

The Independent Inquiry into Child Sexual Abuse said sexualised behaviour by staff was “tolerated or overlooked“.

It said it had received about 350 complaints dating back to the 1960s.

In its report, it said this was the biggest number of allegations of child sexual abuse for any of its investigations so far and added the “true scale is likely to be higher“.

The Independent Inquiry into Child Sexual Abuse (IICSA) said the abuse was widespread “for more than five decades” and repeated failures to learn from mistakes exposed more young people to harm.

It also criticised staff at Beechwood Community Home in Mapperley, saying they were “threatening and violent“, with sexualised behaviour towards children “tolerated or overlooked, allowing abusers to thrive“.

Children suffered abuse, including repeated rapes, sexual assaults and voyeurism, at many of Nottinghamshire City and County council’s homes as well as in foster care.

One girl who was abused while in foster care was later placed into a children’s home, where she was visited by her abuser.

The inquiry found in one home inspected in the early 1990s “all children resident over a 12-month period were found to have been exposed to harmful sexual behaviour“.

From the late 1970s to this year, 16 residential staff and 10 foster carers were convicted of sexual abuse of children in their care.

The IICSA panel heard 15 days of evidence from 115 witnesses at public hearings in London and Nottingham in October.

What do the victims say?

Claire Blake, who has waived her right to anonymity, was abused at Beechwood in the late 1980s and early 1990s.

She said: “I’m still suffering now and I’m 42. I didn’t even have respect for myself, never mind anyone else, I just existed.”

She said seeing the councils “finally start acknowledging” abuse was a positive step, but added: “I think the people that were in charge need to be held accountable.

“They knew, and they hid it, and I think people need to be held responsible.”

Another victim Caroline Nolan said she “withdrew within myself” because of the abuse.

“As I got older, I had very bad anger issues,” she added.

David Robinson, another victim, said the report showed “things should have been addressed decades ago, at the time when children were being abused”.

“I’m astonished to find out that people who were put in a position of trust abused that trust, and were being paid for it,” he said.

John Mann, MP for Bassetlaw, said the report showed that “even today those who’ve survived child abuse in the past have not been treated properly or fairly“, and called for authorities across the country to improve.

Who is to blame?

The IICSA said some foster carers were allowed to carry on looking after vulnerable children even when they were “known perpetrators“, including some who “then went on to abuse children again“.

It said there was “too much willingness on the part of council staff to take the side of the foster carers and to disbelieve the child“.

The report found only two disciplinary actions were taken when allegations of sexual abuse were made at Beechwood, both of which “were inadequate“.

County councillors looking after the oversight of children “did not question the scale of sexual abuse or what action was being taken“, which the inquiry said was a “serious failure of scrutiny and governance“.

John O’Brien, secretary to the inquiry, said the Nottinghamshire investigation was “in terms of scale, the most shocking we have seen“.

“We’re not talking here about one individual that either blocked or actively participated in the sexual abuse of children, we’re just talking about a regime that over many years just didn’t recognise what they needed to do to protect children.”

Nottinghamshire Police was also criticised by the inquiry, which said the force’s initial investigation into allegations was “not adequately resourced” and complaints were not dealt with “sufficient seriousness“.

Chief constable Craig Guildford said the force had worked to improve specialist training for officers and added: “The relationship between survivors and the police is now one of predominantly trust and positivity.”

Have the councils apologised?

The IICSA panel said comments by then city council leader Jon Collins – who was quoted as saying in a meeting last year the authority “will apologise when there is something to apologise for” – were “crass and caused avoidable upset“.

The report criticised the city council for its “guarded” approach to issuing public apologies for failings, saying the authority was “slow to appreciate the level of distress felt by complainants“.

It recommended that both councils “assess the potential risks posed by current and former foster carers” and ensure carers from external agencies are properly assessed.

It also called for the city council to commission an independent review “of their practice concerning harmful sexual behaviour, including responses, prevention, assessment, intervention and workforce development”.

Current city council leader David Mellen, who gave evidence to the inquiry, said the council acknowledged it had “let some young people down” and should have closed down Beechwood sooner.

“We hope that the changes that we have made can reassure people who have been abused in the past that children are much safer now,” he said.

County council leader Kay Cutts said she was “utterly ashamed” by the abuse, and promised to implement any recommendations made by the report.

“I can’t apologise enough to the survivors and their families,” she said.