THE DEATH OF BERNARD MONGAN – JANUARY 2020 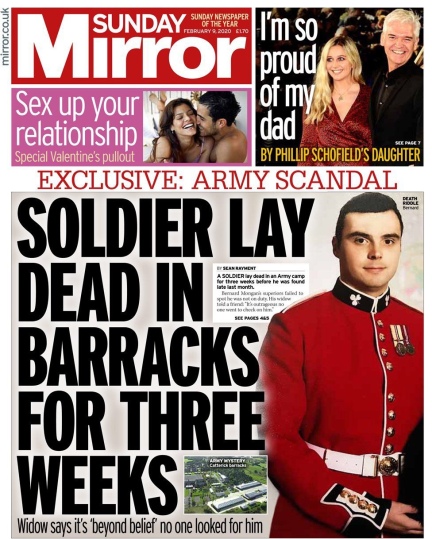 This is a quick blog that I felt compelled to write after I first read the above article online.  I was so appalled by what has happened it seemed only just to assist the family in highlighting their appeal and support their petition.

This is a live, ongoing investigation so details may develop over time and I will keep this page updated to reflect any further news.

On the morning of 23rd January 2020, North Yorkshire Police were called to Catterick garrison to investigate a ‘sudden death’.  Lance Corporal Bernard Mongan’s fully clothed but badly decomposed body was found in his barracks.  His family were informed.

Bernard Francis Mongan was 33 years old, 6ft 4″ and served in the British army just like his brothers.  Born in Bristol, he was raised in Ireland as part of a large family.  He was married to Bethany and they had three young daughters, to whom he was devoted.  Although he and Bethany had separated by the time of his death, they were on good terms.

Bernard originally joined the 1st Battalion Irish Guards in 2004 and saw action in the Iraq war.  In 2012 he took redundancy as part of government cutbacks, and left the army but rejoined to the Royal Signals five years ago, where he was attached to the Intelligence Corp stationed at Catterick Barracks in Yorkshire, but was due to begin a short-term transfer imminently at the 77 Brigade headquarters in Berkshire – a challenge he was looking forward to.  Bethany described Bernard’s work as ‘very secret and sensitive’.

People, including former Army colleagues, described Bernard as kind-hearted with a good sense of humour – a soft, calm, friendly and gentle.

According to both Bethany and his mother, Mary, Bernard had made allegations of racist bullying over the fact he was from Irish traveller heritage.  Bethany claims that two soldiers from Northern Ireland attacked Bernard in November 2018 and an investigation into bullying continued until November 2019.

A veteran’s support worker, Bella Innes, who had known Bernard for a decade and had remained in regular contact with him corroborated the allegations, adding: “Bernie was intensely bullied.  He told me he was beaten up by two Irish Guardsman because he had a southern Irish accent.  He said they called him a terrorist, beat him to the ground and jumped on his head.  His face was black and blue.  I know he has been bullied a lot in the past.”

He apparently also claimed that there were times when he felt he was being treated unfairly by senior members of the battalion – his leave would be cancelled at the last minute and his career wasn’t progressing as quickly as he felt it should have done.

An Army spokesperson said: “Following the sad death of LCpl Bernard Mongan, our thoughts remain with his family, and we will continue to offer them support.

“This is clearly a tragic case, and we ask that their privacy is respected during this very difficult time.

“We can confirm that a civil police investigation is ongoing, which will have the full cooperation of the Army.

“The wellbeing of our soldiers is paramount, and while it would be inappropriate to comment further on the investigation, the Army will look at its findings very seriously.”

An autopsy failed to provide any answers as to the cause of death because the decomposition was too far advanced, and now his family are awaiting the pathology results but there is a chance they may not provide answers either.

There was also no note left that would signify suicide, and Bethany is adamant he was in a good state of mind when she last spoke with him.

The police have now handed the investigation back to the army, who are not commenting further on the matter whilst they undertake their own investigation.

Colonel Richard Kemp, a former commander of British troops in Afghanistan, said: “I have never before heard or experienced anything remotely like it about a service member of the Armed Forces on a military base.  The Army is usually scrupulous about accounting for every individual, and there is a well known military aphorism ‘no man left behind’.  It seems like this man was left behind, and this very sad affair can only be due to a number of leaders failing to do their jobs.”

The family of Bernard feel aggrieved by what has happened and it was only because his mother began publicly asking for help that this story came to light.  They are obviously questioning the issues surrounding his death but feel frustrated by the lack of communication from the Army.  Did Bernard pass away from natural causes or was it caused by something more sinister?

I don’t tend to express my own opinions when covering cases, but any time I come across a story that involves someone having died alone and not discovered for some time, I find it really upsetting.  At the end everyone deserves to have someone with them, it’s so basic but important.  The very fact this has happened in a military base beggars belief.

I really hope that Bernard’s family get the answers they deserve, but so far they feel as if this isn’t happening and are obviously desperate for support.  Therefore I have attached a link (BELOW) to a petition set up by Mary (Bernard’s mother) asking for support in ensuring a proper investigation is carried out into the circumstances surrounding her son’s death.

CHANGE.ORG – I NEED ANSWERS FOR MY SON WHO WAS LEFT DEAD IN ARMY BARRACKS FOR 3 WEEKS

The family’s grief is palpable and not only are they grieving over the loss, but they have the added injustice that the decomposition was so advanced they cannot view Bernard’s body in order to say goodbye.  They are able to lay Bernard to rest, and his funeral is taking place in West Yorkshire on 20th February 2020.  I hope they gain the smallest comfort from that.