and the JIMMY SAVILE encounter

In 1971 the BBC was embroiled in what was to be known as the “Payola Scandal” following an undercover expose by the News of the World.  A singer, Janie Jones and her ‘accomplice’ Eric Gilbert, were sent to trial in 1973 at the Old Bailey accused of numerous charges involving prostitution, demanding money with menaces, intimidating witnesses, obtaining money by deception and lying to obtain a divorce.  Her ex-husband, John Christian-Dee – a songwriter, was also charged with intimidation.  All three denied the charges. 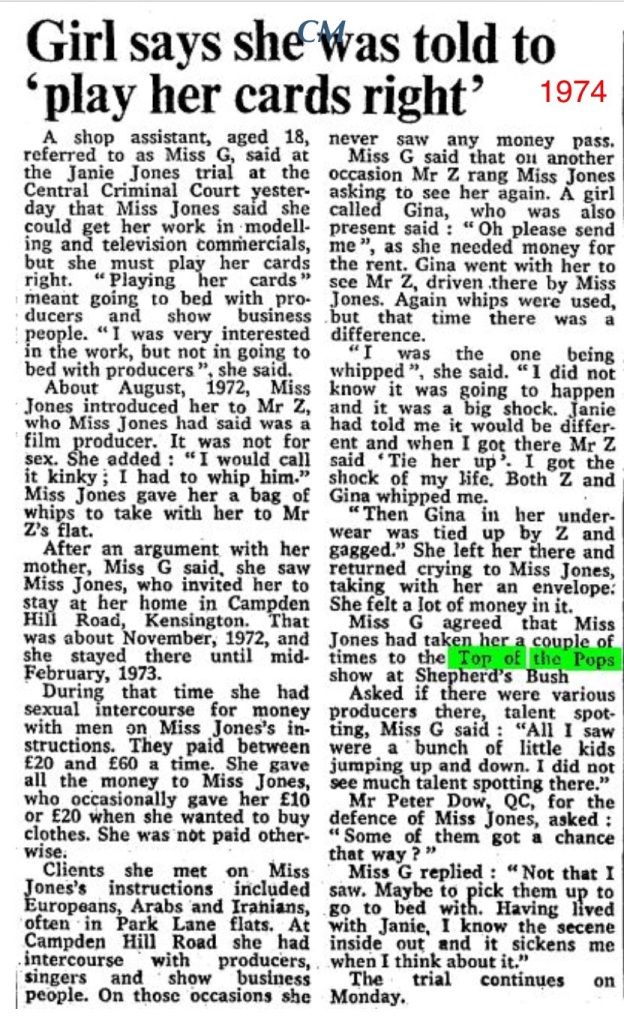 An inquiry was launched and undertaken by Brian Neill QC and the full report has never been made public.  You can see a heavily redacted version, however, released following a Freedom of Information request:

During the course of the investigation, Jimmy Savile was questioned by a solicitor working with Neill (James Crocker), but refused to cooperate and instead ridiculed the solicitor.  James Crocker complained about Savile to the head of BBC’s legal team, Richard Marshall, who claimed there was nothing he could do about it and the matter was subsequently hushed up.

Top of the Pops Investigation

The detectives involved in investigating the Payola Scandal were also involved in an investigation in to Top of the Pops (hosted by Savile, of course)  in 1971 when a 15 year old girl, Clair McAlpine – a dancer on the show – claimed she had been abused by DJs and other celebrities.  Clair committed suicide three months after the story broke and her diary told shocking secrets of her abuse at the hands of Jimmy Savile and others.

You can read more about Clair McAlpine and the BBC’s failure towards her in this great blog post by G7UK:

There was a large police investigation and charges were brought against a record company executive, BBC producer, theatrical agent and several record producers.

Roger Moore’s former wife, the singer Dorothy Squires, was also accused of bribing BBC producer John Dabbs but the case against her was dropped.

Janie Jones was eventually jailed for 3 years in 1974, and following her release in 1977 she claims she was ordered to meet with Savile – a bizarre meeting in which Savile accused her of “siding with Myra Hindley” whilst she was jailed (Savile was a supporter of Ian Brady – the Moors Murderer). He also spoke of his desire to have sex with underage girls.

Savile just kept saying that he could not understand why people went on about 13-year-old girls because they were ‘gagging’ for it. I told him that anybody who wants to go with a 13-year-old is a paedophile.

“Then he was bragging that he had met Ian Brady. He said it was disgraceful that I was siding with Hindley against Brady. At the time he was doing Jim’ll Fix It, but he was interested in 13-year-olds.

You can read the full Telegraph article here:

The BBC has clear questions to answer in respect of the continual denials and cover ups over the years.  Even with the latest independent inquiry into Savile – who is now referred to as “Britain’s most prolific paedophile” – the BBC still maintain they did not know, so when they air dubious programmes designed to discredit survivors of abuse at the hands of VIPs such as this dreadful Panorama programme in October 2015 – The VIP Paedophile Ring: What’s the Truth?….

… it leaves a bitter taste in the mouth of many who pay their licence fee knowing they fund the cover up of abuse.  You look at who the BBC have given us – Savile, Rolf Harris, Jonathan King, Gary Glitter, Freddie Starr, Stewpot, John Peel – to name but a few, and you also consider the fall out of the airing of Panorama following which one victim tried to take their own life (just as Clair McAlpine did all those years ago), and you are left wondering why you should continue to fund such horrors.

Here are some original news articles about the story: 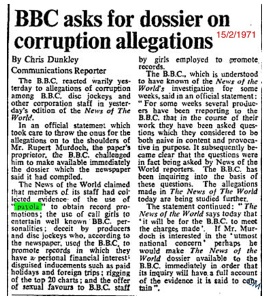 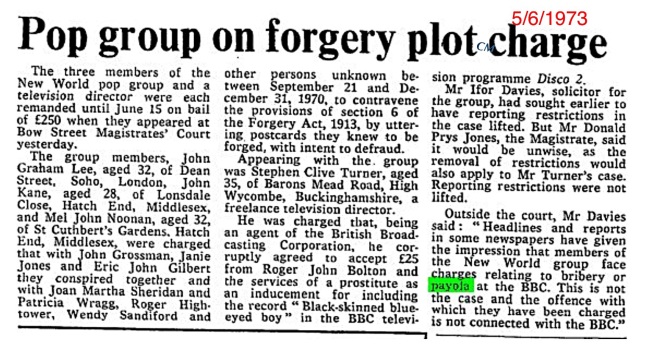 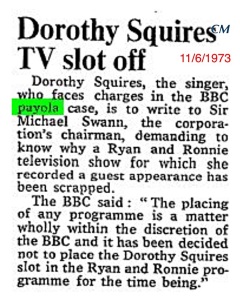 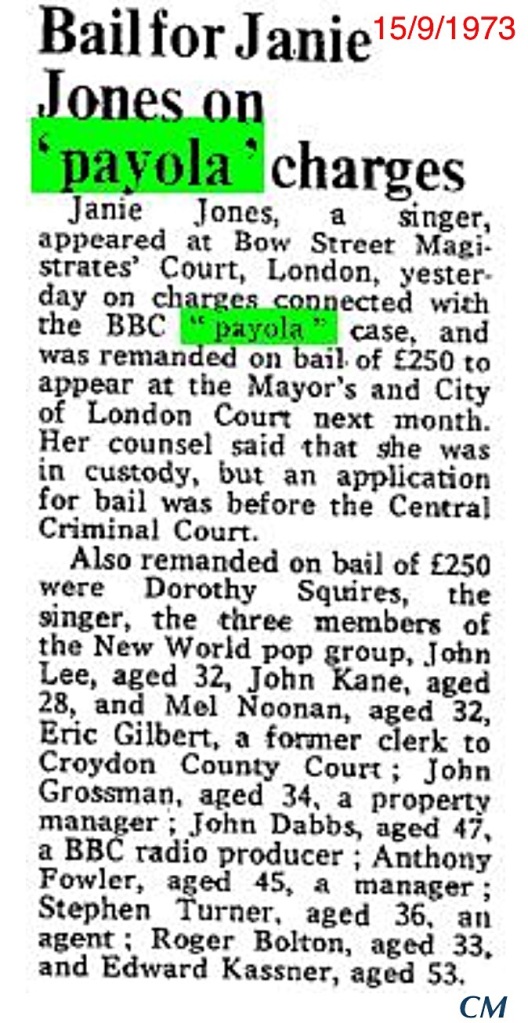 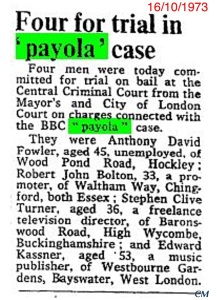 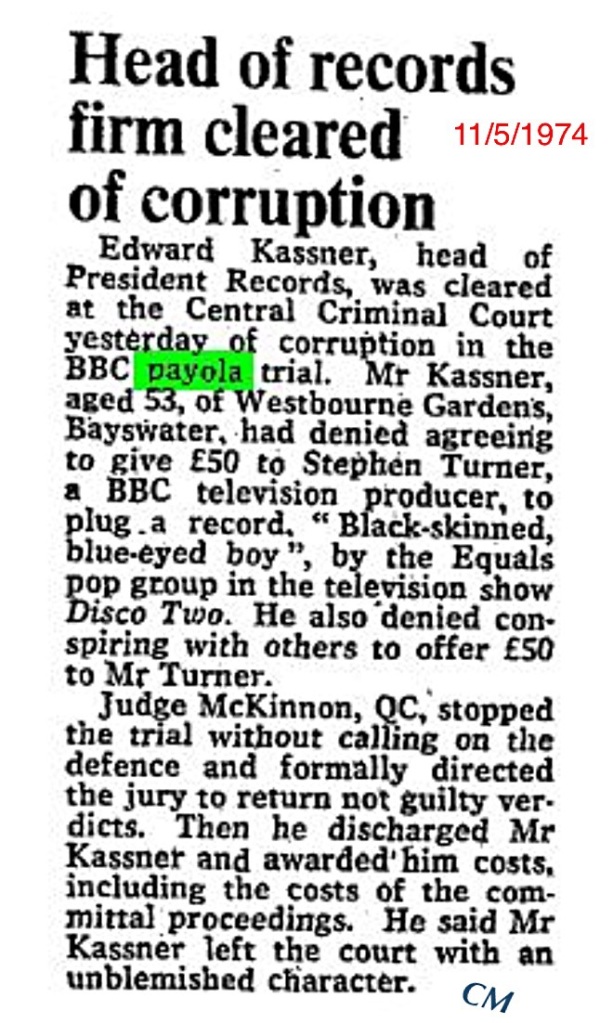 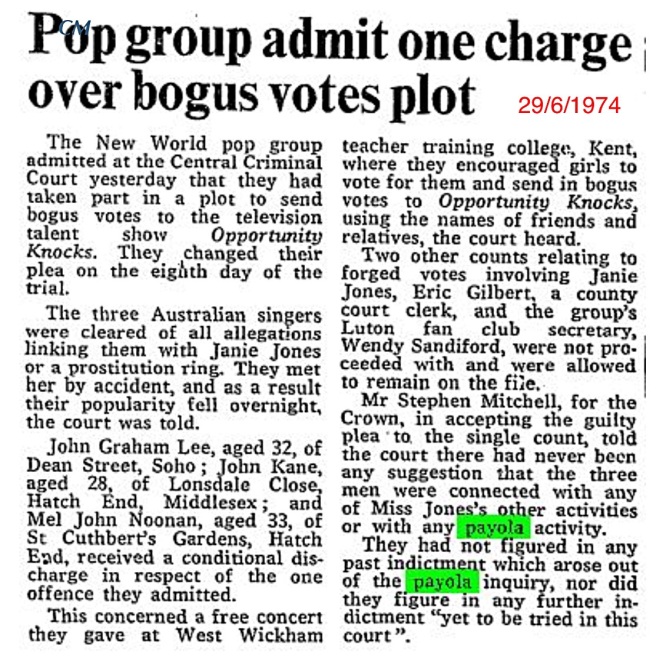 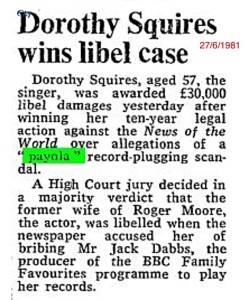 It’s interesting to note that Janie Jones was tried 6 years previously on similar charges but was acquitted: https://news.google.com/newspapers?nid=2507&dat=19670519&id=7mNAAAAAIBAJ&sjid=caMMAAAAIBAJ&pg=2239,3950348&hl=en

7 thoughts on “BBC: The Payola Scandal”