In September 1974, a 17 year old boy was found dead inside a chimney in a disused shop in Islington.  The circumstances surrounding the death of Michael (or Jarrett as he was known by friends) remains a mystery but his friend, Bill, is convinced it wasn’t an accident.

Jarrett was born in Kingston, Jamaica on 7th October 1956.  After Jarrett’s father left his mother, Jarrett and his mother moved to London in 1961 and settled in Islington before then moving to Kings Cross.  His mother eventually remarried in 1966 and Jarrett had a younger brother and sister.  He was popular with his peers, enjoyed football, school, attending a local disco and eating ice cream.

Jarrett attended Highbury Grove School in Islington and it was during his final year there he began getting in to trouble.  A local playground worker has spoken of how Michael would be locked out of his home for returning late and forced to sleep on the street and had also began getting into trouble with the police.  He left school in 1972 and would regularly stay with his friends due to him being locked out of home – sometimes for a week at a time.

By 1973 Jarrett’s life had spiralled further downwards and he was placed in to the care of Islington social services.  He was arrested in January for burglary and appeared at Old Street Magistrate’s Court where his residential address was given as Highbury Crescent children’s home.

He eventually appeared before Islington Juvenile Court on 9 February 1973.  This was the last time his mother would see her son as he absconded from the children’s home just two days later.

Highbury Crescent Children’s Home was run by Islington council.  It has since been named by former residents as yet another home where abuse took place.

“JARRETT WAS AN OBVIOUS TARGET BECAUSE HE WAS BLACK…“

Jarrett was only one of a few black youths in the Kings Cross/Islington area and because of that he was easily recognisable and known by many.  A close friend described Jarrett as being “like Eddie Murphy – a big smile with gleaming white teeth“, who “was a dear friend not only to me, but to many others, he was well respected and well liked…. Police at the time were extremely racist and violent towards Michael“.  Bill paints a really sad picture of the abuse Jarrett endured at the hands of local police by whom he was regularly beaten in a simply shameful case of overt racism and physical child abuse.   His was not an isolated case.

During the 1970s, Islington had a particular problem with police harassment and brutality and a special inquiry was eventually set up in 1977 in to the treatment of black youths by police in Islington following a social worker’s complaint against police for assaulting a 14 year old boy in their custody and whom they had stopped 38 times in just 28 days.

Jarrett’s friend recounts a number of incidents.  The first was in Kings Cross: “…There were three of us walking down the street: me, another white boy and Michael, and a police officer on the beat was coming towards us.  He beckoned over Jarrett and took him round the corner where no one could see and then we heard a commotion.  Jarrett came out and he was crying and screaming at the policeman.  As we walked off, the policeman looked over his shoulder and laughed at us.  It was heartbreaking…. I will never forget those memories“.

Bill goes on: “On numerous occasions I went running with Jarrett because we were scared of what the police would do to him and for those reasons I need to find out if anyone else was involved in Michael’s death.  I myself witnessed police brutality to someone who was just a young boy, evil beyond belief, from those who abused their powers and it was because Michael was black“.

Bill also recalled another encounter with the police: “We must have done something because the police were after us and he was really scared.  Jarrett was petrified of the police and they were quite brutal at the time and Jarrett was an obvious target because he was black.  He was particularly vulnerable when it came to the police… I have no doubt that they (the police) killed Jarrett“.

Having researched further in to this, I have discovered that there was a culture of brutality at Islington Police Station, which corroborates the reason why an inquiry in to conduct was set up in 1977.  I have found a number of reports about attacks and deaths in custody, including:

After he absconded from the home on 11 February 1973, there are a number of unconfirmed sightings of Michael.

Jarrett’s body was found by a builder on Wednesday 11 September 1974.  His body was found upside down inside the chimney on the second floor of a disused wallpaper shop (Blakey Morris) at 67 Upper Street.  It remains a mystery how Jarrett came to be there as the upper floors had been blocked off by sheets of corrugated metal in August 1972, so it was concluded that the only access seemed to be via the roof.  He was eventually laid to rest in East Finchley cemetery.

Many of Jarrett’s friends were questioned by police at the time of the investigation.

Interestingly during the police investigation, Jarrett’s social worker, Elizabeth Yeats, told police: “I did not hear anything of him until just before August 1974, when a youth Michael P, told me that there had been a chase over the roof-tops and he then disappeared.  He wouldn’t say anymore“.

However, when interviewed by police, Michael P denied saying anything to Yeats.

Police took statements from people who lived either side of 67 Upper Street.

THE COMMUNITY KNEW BEFORE JARRETT’S FAMILY

Information contained within the coroner’s file suggests that the police had known Jarrett’s identity weeks before his family were informed.  Jarrett was formally identified by dental records on 27 September 1974.  However, in a statement given to police by Jarrett’s brother, he stated: “Two or three weeks before you came to see my mum I met a boy at the newsagents in Caledonian Road.  It was a Saturday about 6pm.  He was white and in a group of white boys and two girls.  He started looking at my paper.  He just said, “The police said your brothers’ dead”.  I said, “How do you know?”.  He didn’t say any more but walked off“.

In a statement given by another schoolboy it was suggested that not only had local gossip been discussing the body as being that of Jarrett, but that the police knew and had been canvassing the local community for information.

An inquest was held on 23 January 1975 and was unusually held before a jury and included a visit to the location where Jarrett’s body was discovered.  The coroner was Dr Douglas Robert Chambers, and also attended by a pathologist and numerous police personnel.  It lasted just over two hours and involved 20 witnesses.  The coroner recorded an open verdict.

A post mortem recorded no fractures or other injuries and that Jarrett’s body had been in the chimney for at least three months – possibly up to six to nine months.  An actual cuase of death couldn’t be determined due to the deterioration of the body. 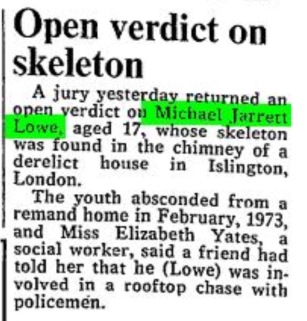 Within the coroner’s file sat two statements made by PC Andrew Maybury from Islington Police Station in which he reported how, between February and March 1974, he and other officers had searched the rooftoops in the vicinity of 67 Upper Street after reports of a ‘suspect on the roof’.  PC Maybury stated they found nothing.  However this gives some credence to the claim by Elizabeth Yeats of a possible rooftop chase.

Old chimney flues within Victorian houses are tiny – approximately 9″ in diameter – and this is why little boys were purchased from workhouses or taken off the streets during the 19th century and apprenticed to a master sweep.  The boys were normally aged between 4-10 (but generally most were under 7) and were also half starved to keep them small enough to navigate the flue cavities.

You can see from the illustrations that chimney flues are rarely a simple vertical cavity – they do, in fact, have small ledges and angles inside.  Many of the youngsters became trapped and suffocated.

If you are related to Jarrett and wish to obtain his file from when he was in care, please contact Liz Davies at Islington Survivors Network who is keen to help in any way she can.  This also applies to anyone who was within the Islington care system and who wish to obtain their file.

A BIG THANK YOU

Jarrett’s friend, Bill, has kindly helped to fill in some gaps with this blog post and given a voice to Jarrett, whose death has been allowed to quietly disappear in to the past.  Having to relive the memories of what he saw and lived through and the sense of injustice he has endured for over 40 years has taken it’s toll but his determination to see Jarrett’s death properly investigated still burns strongly.

Also a big thank you to Liz Davies who has helped with some of the elements of this story.

If you have any information on Jarrett’s death, please contact either the Institute of Race Relations or Islington Survivor’s Network.

Also, it is understood that another boy died in similar circumstance (within a chimney). If anyone has any information on this matter, or the boys name, please either comment below, or contact me.  Many thanks.