Following lengthy research I suspect I may have identified someone who is mentioned within the Elm Guest House paperwork.  The person concerned was mentioned in connection with Neil Keir and David Hamilton Grant and this ‘chart’ of how the different depraved cogs joined together to make one nasty machine also makes mention of him at the top.  The person in question is named ‘Barsby’ (incorrectly transcribed in this picture).

I believe that Barsby was, in fact, ‘Uncle George’ George Barsby – a local man who lived within a stone’s throw of Grafton Close children’s home.  Barsby was a 56 year old supermarket manager, who also referred to himself as a ‘voluntary social worker’ when he made numerous appearances at Richmond Magistrates Court on 16 charges of child sexual abuse in 1978 (which tallies with the note at the top of the graph).

After 11 appearances at Richmond, his trial was eventually transferred to the Old Bailey and on 23 March 1979 he was sentenced to five years imprisonment.  Interestingly, one of the allegations against him included making pornographic photographs of children (which also tallies with the note at the top of the graph).  He was referred to as a counsellor who targeted single mothers and their children.  His solicitor argued that Barsby had previous good character but following his social work, he had “fallen for tempation”.  He was also found guilty of theft from his employers, Sainsburys, and of false stocktaking figures. 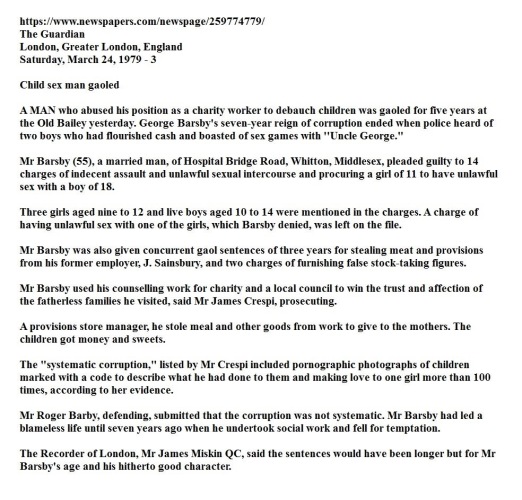 A year later, a trial took place at Kingston Crown Court which was described as the ‘Amsterdam Connection’ in which a man named Alfred Hart from Twickenham was found guilty of dealing in child abuse images along with his partner, Michael Dennison from Blackwater, Camberley.  Hart was described as “one of the ringleaders” which leads me to believe this was a much bigger case involving more than just the two who appeared in court.

Delaney lived in Hounslow – on the Twickenham borders – and the reason I have included these trials in one post is down to the proximity of the abusers in relations to Grafton Close childrens’ home.

Here are the addresses mapped so you can see the close proximity of these repugnant individuals.

There were more depraved individuals living within the vicinity at that time and I will add them in due course.

THANKS TO: Troy (@snowfaked) for unknowingly providing the much sought after conclusion to the Barsby trial.