THE MURDER OF TRACY MEAD

This blog post in covering the very scant details I can find regarding the death of a young London girl in 1992.  The press showed little interest and according to Tracy’s mum, neither did the police.  I just happened to stumble across it whilst watching an old episode of Crimewatch on Youtube.

Sadly, this is a case that has never been solved but there may be someone out there who knows what happened to Tracy, or where she had been staying in the two weeks prior to her body being found, so I am covering this case with as much detail as I can find.

Tracy was born on 20th March 1977.  She lived with her mum, Kim, and her younger sister at Gaydon House, Warwick Estate in Paddington, which is just a stone’s throw from the notorious Elgin Avenue I’ve covered in a previous blog post.  Tracy came from a close-knit family but according to Kim, she hated the fact their flat was on the sixth floor so would often stay with Kim’s sister or her grandmother in Lothrop Street, North Kensington, where friends would often call for her.

Tracy was a street-wise 14-year old girl who had been persistently truanting from school for a number of months prior to her disappearance. During the day it is believed Tracy would hang out with friends or wander the streets of North West London.

Tracy had spent the day at her grandmother’s house in Lothrop Street, North Kensington.  Her best friend called for her that afternoon but Tracy told her she would knock for her that evening after she’d taken her younger sister back home to Warwick Estate.  Tracy showed no unusual behaviour or spoke of doing anything out of the ordinary, but she never turned up at her friends’ that evening as promised.

At around 5:30pm, Tracy headed back to the Warwick Estate with her younger sister, as planned.  Kim described her as being very relaxed and her ususal self.  Tracy said she was planning on staying at her aunt’s house that night and asked for money for her bus fare as she planned to go into school the following day.  Before she left at around 7pm, Kim gave her £2 and it’s believed this was the only money Tracy had on her when she left that evening.  Tracy did not arrive at her aunt’s house in Kensal Rise, and did not attend school the following day.

Realising that Tracy had not made it to her aunt’s house nor school on Tuesday, Kim attended the local police station to report fears that her daughter had disappeared.  Despite her truanting, Tracy had never gone missing before, and police submitted a missing persons report.

Unfortunately Kim felt police showed little urgency in investigating Tracy’s disappearance and so, taking matters into her own hands, Kim began walking the streets, approaching locals, friends, shopkeepers and anyone that may have seen Tracy.  On her return home she discovered there had been one sighting.

As she crossed the Half Penny Steps Bridge on Harrow Road at approximately 5pm, a girl noticed Tracy arguing with a boy underneath the bridge.  He was described as:

1:30pm approx: A girl matching Tracy’s description was seen in Shepherd’s Bush.  The girl had asked a woman for directions to “Adam’s Cafe”, but the woman was not familiar with the name.  Suggesting the girl try looking around the vicinity of Shepherd’s Bush Market where there were a number of cafes and heading that way herself, they walked together.  The girl explained that she was supposed to be meeting her boyfriend and his friends in Adam’s Cafe, and it was at the market that they parted ways.

4:30pm approx: Two girls went into Cooke’s Pie and Eel Shop on the Goldhawk Road.  The woman who served them described them as clean and tidy but looking “tired” and suspected they had been sleeping rough.

The girl who ordered food was described as:

The second girl was blonde and matched Tracy’s description.  The woman recalls she seemed to have something stuffed underneath her jacket.

The girls took their food and left.

Another reported sighting occured on the same day.  Tracy was apparently seen leaving the Yin Yo Chinese restaurant on the Goldhawk Road.  She was with a Scottish, black male who was heard to say “Let’s go home Tracy.”

At around 3:30pm, a fisherman discovered Tracy’s body in the Grand Union Canal near Kensal Rise.  Tracy had two knife wounds to her body and was partially clothed.  Her missing clothes were found in two locations alongside the canal.

Although described as ‘superficial’,  Tracy had been stabbed in the stomach and arm with a small kitchen knife.  Although there was no evidence of a sexual assault, bruising on her body led police to believe that there was a sexual motivation behind her death.

The coroner ruled that Tracy had drowned very quickly after being stabbed and recorded a verdict of ‘Unlawful Killing.’ 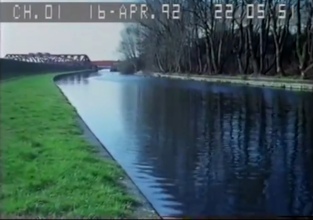 It was a dark, foggy night on 31st January 1992, and police believe Tracy headed willingly to the Mitre Bridge over the Grand Union Canal that evening.

Police featured Tracy’s death on Crimewatch on 16th April 1992.  DI Colin Wright, who appeared on the programme, expressed his own personal theory during the appeal.  He felt that Tracy had gone to the canal with a group of friends, something had happened that got out of hand and Tracy ended up in the canal.  DI Wright believed that there may have been a sexual motive behind what had happened and although Tracy had gone there willingly with others, things had gone further than she had expected, and he appealed to anyone within the group of friends to come forward with information about what happened that evening.  Had Tracy jumped into the canal to escape whatever was happening to her, did she fall or was she pushed?  Why would a young girl undress by a canal on a freezing cold January night?

Police were keen to ascertain Tracy’s movements in the two weeks prior to her body being found.  There had been a number of sightings of her in the Harrow Road and Paddington areas, but they were keen to find out where exactly she had been staying.

A pink and yellow top that Tracy had been wearing on the night she left home was missing, and police appealed to anyone that may have seen it.

Unfortunately there was a poor response to the Crimewatch appeal, and police came up against a wall of silence in the community.  As a result, the investigation was wound down less than a year after Tracy’s death and seems to be have been consigned to history ever since.

Clearly the investigation could have been assisted with better reporting and press interest.  Unfortunately, Tracy’s death was used as an opportunity to highlight addiction issues and was conflated with glue sniffing (completely dismissing the fact she had been stabbed and was half dressed.)  Reading such reports may have discouraged any youngster from coming forward with information, for fear that they too would be unfairly judged in exactly the same way.  Police dismissed any link between Tracy’s death and glue sniffing.

CAN YOU HELP SHED LIGHT ON THE CASE?

Sadly for Tracy’s family, this case has never been solved.  Tracy was just about to turn 15 and had her whole life ahead of her.

Did you know Tracy?  Were you part of the group she was hanging around with?  Maybe someone had confided in you but being young at the time, you may not have been in a position to come forward.

It’s nearly three decades later and possibly with children of your own, you may feel more able to provide crucial information that could help solve this case and give justice and peace to Tracy and her family.