Secrets of a Forgotten Scandal 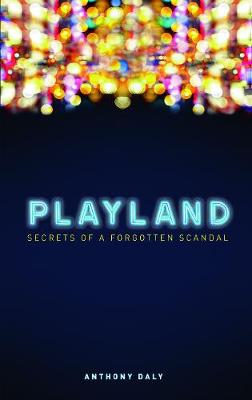 Anthony Daly was just 20 years old when he decided to leave the Troubles in Derry and travel to England.  Little did he realise he would find himself in personal trouble and at the mercy of a number of nasty characters centred around the Playland arcade in Piccadilly.  Those characters weren’t just gangsters or chancers, they included many from the upper echelons society who saw youngsters as commodities and play things.

In his book, Tony gives an extremely candid, brave and heartbreaking account of what he endured in just three months during 1975 when he travelled to England and to his dream job at Foyles bookshop.  Ending up at the mercy of some of the most depraved human beings from all walks of life due to blackmail, Tony found himself engulfed in different circles of depravity and shines a light on the inner workings of how they operated.

Anthony pulls no punches when recounting what he went through and so I will urge caution and advise that some people would require a trigger warning.  That said, it is a must-read for anyone interested in London’s West End connections, gangland and underworld, police corruption and VIP paedophile rings because it makes the whole murky business much clearer.  He has also undertaken research into records in order to back up the information he has provided in his book and this also has it’s value in terms of information that was forthcoming during the Playland trial.

Having given two days of evidence to the Metropolitan Police along with a diary he kept AND photographic evidence, they decided not to proceed with the investigation, despite the fact some of those named were still alive.

I’m not going to go into too much detail of Anthony’s book because it is his story to tell.  However, I have listed some of those who are named in the book and added comments where possible.

The names of those listed below were not all necessarily involved in any wrongdoing.

Client – Those who obtained the services of boys through either the Playland syndicate or the ‘Network’ (associates of the Hornbys etc).

Names of those Anthony encountered during his time in London:

Others mentioned within the book:

Places, parties where Anthony was taken and who attended:

The initial investigation into Playland began a year before Anthony arrived in London and was instigated by a Playland firm whistleblower, who took his story to Peter Earle, crime reporter of the News of the World newspaper.

Police were tracking the movements of 18 men aged 22-60 years, with each man being allocated a code letter.  Those known were:

The majority of the Playland files are on extended closure, with just 130 documents currently accessible.  Anthony has compiled a small amount of information from the documents within his book as well as some information from the trials.  He submitted an FOI request for the remaining files to be made accessible, but the Ministry of Justice (from where the files originated) decided against it.

152 boys were interviewed, and it was discovered that Charles Hornby had used bribes and threats against a few of them to stop them giving evidence.

Mr X, the unnamed man in the trial, is believed to be the Playland whistleblower.

After the trial’s conclusion, Earle from the News of the World finally published his scoop, in which he stated that dozens more arrests were expected, and some of the men involved were showbusiness celebrities and well-known men within financial circles.  We now know that this never happened.

Two of the boys who appeared in the ‘Johnny Go Home‘ documentary were also witnesses in the Playland trial, which is why the judge requested that the documentary be withheld from broadcast until after the trial had ended.  (The part featuring the two boys was edited out as part of a compromise.)

18 thoughts on “PLAYLAND: Secrets of a Forgotten Scandal – New book by Anthony Daly”